So here we are the beginning of our last week.  It has both equal parts flown by and crawled-ha!  At the end of last week, Heather and I were on the struggle bus.  Both of us had intense cravings and major exhaustion.  They do warn on the program that when you start the “cleanse” packets during weeks 3 & 4, that you can experience a second layer of detox and quite honestly that is exactly what it felt like.  The sub zero temps and bursts of snow did nothing to help.  At one point Heather said “are we doing something wrong?”, because it felt like a set back.  However I feel like we are over that hump now.

Our improvements have stayed constant.  Heather, with her itching and headaches, have both remained at bay.  My mood and energy level, aside from a few dips (I’m looking at you daylight savings) have remained steady.  We are both sleeping so much better and at the risk of sounding corny, I just feel really good.  I miss coffee, no doubt, and I would have sold my soul for the brownies I passed up last Saturday but I also know that when I reincorporate those things, I will feel like crap.  The goal of this last week is to mentally prepare for how and what you will reintroduce or NOT!

My friend Meredith is wrapping up the 30 days and said she is going to keep going!  (She looks and feels fantastic) . I will probably do the same, although I fully plan on having a great time on St. Patricks Day!  Heather is going to have to do some investigative work on which foods were causing her itching and triggering her headaches.  If she could eliminate those food groups entirely, then she might be able to also stay off some medicine, which would be life changing.  I also think there is a way to find a better balance for myself.  Instead of having two cups of coffee in the morning every morning, because that is just what I did out of habit, I will better listen to my body for what it is craving.  Thats the other benefit of this program, I feel way more in tune with my cravings, and have found much better alternatives to processed choices.  Berries help satiate a sweet tooth and a little almond butter on some gluten free crackers helps to curb that afternoon hunger strike where I would grab something processed.  I have relearned what to eat to feel better and kicked some major habits.

In general I feel like the program has given me my power back.  I was a slave to coffee and sweets because I was addicted to them.  I do not feel like that anymore.  I am more in control of my mood, energy level, sleep, and digestion than I have been in an long time.  It feels great! 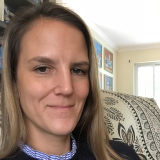